Have a very Layman Christmas!

OYL: From zero to goofball in 365 days Last night Heroes came and went, and after half-heartedly watching the season and trying to give a damn, I just could not. I skipped the ending, and did not miss it one bit, and doubt I will ever look back.

But it got me thinking about exactly what I'm watching these days. And, of course, my biggest question of the TV season: WHY DOES THE OFFICE SUCK SO BAD THIS SEASON? 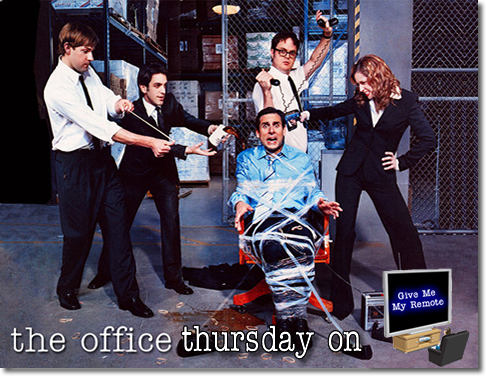 Used to be I LOVED The Office, the American and the British version, and about Tuesday I'd start looking forward to it, and even the quickie previews were usually enough to make it laugh. Usually I'd watch it while it aired, and then watch it again the next day, because there was always something I did not notice the first time around, or something that would make me laugh all over again.

Not this season. Maybe it's because they did that lame super-sizing shit, and stretched out all the jokes, but the opening episodes of the series were not just unfunny, but painfully so. Michael's IQ seemed to drop by twenty points, and he was not just incredibly stupid, but also shrill. It really feels like Michael is a parody of his character, or the writers lost track of what made the character work, while the other characters have descended into near-caricature. Since the super-sized episodes ended, it's gotten marginally better, but the damage has been done, and the show just does not seem to be what it once was.

Like I said, Heroes sucked too, but I expected that. It was overhyped and overblown and it was just a matter of time before it disappointed, Lost-style, and Heroes did exactly that. Good riddance.

So what am I watching?

I'm glad you asked. A couple weeks ago I would have said Pushing Daisies is the best show of the season, and I still think it's damn great, and consistent charmer, with more genuine heart than almost anything else on TV. I love the little touches, like the alliterative names of side characters, and some of their forays into animation, musical numbers, or just plain oddball whimsey. Plus, Mike White and Pee Wee Herman showed up as supporting cast members, and I just love the overall quirkiness.

Still, and I'm surprised to say this, but Chuck has really grown on me. After a great pilot, I thought it was going to settle into a routine, and maybe it has, but I like the characters and the humor and mix of nerd soap with network spyjinx. It's a lot of fun, and after dumping it from my Netflix Season Pass, after a couple of weeks of inadvertently watching it and enjoying it, I added it again, and it's slowly moved into a can't miss for me.

Monday; Not a damn thing,

Tuesday: My Tivo can't tell the difference between new Episodes of The Office and ones running on TBS, so I was getting repeats of that instead of Law & Order SVU. I like Law & Order, as TV comfort food, at least SVU and the original, but the episodes I've managed to catch this season have been amazingly bad.

Thursday: My roommate watches Ugly Betty, and I don;t object to most of it, though it is clearly sugary trash. I also make sure to watch 30 Rock later on NBC.com, and it never fails to make me laugh. Sorry, Office, 30 ROCK IS WITHOUT A DOUBT THE FUNNIEST SHOW ON TV.

Friday, Saturday, Sunday: I catch the Simpsons, when I remember too, but that's sorta irregular.

And that's pretty much it for network TV. Feel free to recommend shows, but the first person who says Journeyman or anything that is a medical show is going to get a sharpened pencil stabbed into their eye.
Posted by "crusher" at 11:54 PM 7 comments:

Problems? Brother, I got nothing BUT problems!

First, a little background. Me and Bumble Buzz go way back. Long before there was a roommate, a punk kid, a mortgage, a car payment, and any number of other soul crushing life elements, there was me and Bumble Buzz, living in a little one bedroom in Pacific Beach, San Diego, 8 or so blocks from the ocean, where life was good and dope was plentiful. When Bumble Buzz was a wee kitten, one of the first thing I did was put her next to my pillow went I went to sleep and petted her as I drifted off. Now, that is her thing. Bumble Buzz isn't much of a cat. She's grouchy, and she doesn't really like other people or cats. She's a scaredy cat. She's the cat that gets gross chin acne and she ones had a big boil on her tail I had to pop. She gets Klingons on her butt and has bad breathe and her fur is sort of mangy. Still, the one single pleasure she gets in life is laying next to my pillow and letting me pet her as she goes to sleep. Clearly, it is her favorite thing in the world. She'll even pace around at night, meowing at me, as if reminding me it is time to go to bed, and as soon as I had to the bedroom, she's on her spot next to the pillow.

Well, as Reggie Hammond said, there's a new sheriff in town.
Lately, I've been waking up in the middle of the night, and REGGIE (the cat, not Eddie Murphy) is laying next to me, by my pillow, nuzzling and snuggling and being a little angel. Usually Bumble Buzz is sitting off to the background, glowering and growling. And now, when I wake up in the middle of the night, Reggie is there instead of Bumble Buzz.

Usually I have to think about it, and convince myself is it not the most wonderful dream I am in. Reggie is soft like pressed Yugoslavian velvet. His breath is like a warm autumn breeze in the countryside, and his purr is like a gentle melody. He's got cute bristly whiskers and a cold wet nose and a scratchy little tongue. I end up staying up for hours on end petting him --AND IT'S THE GREATEST JOY I HAVE EVER KNOWN.

Sometimes, late at night, my roommate is too passed out from drink to rouse to the cry of the baby in the other room, who is clearly very cold, or very hungry, or both. And I know I probably should get up and feed the kid, but petting Reggie is SO AWESOME. Anyway, dear readers, I pose this question to you... Is it possible to love too much?
Posted by "crusher" at 10:22 AM 3 comments: