Remember when I used to have comic books coming out all the time? Yeah, me too. Those days are coming back, ladies, mark my words.
Posted by "crusher" at 12:31 AM 2 comments:

This is the new shit, yo

Because you are all sad and pathetic and hang on my every word, and everything I do is the coolest and absolute height of fashion, I thought I would share some of my recent purchases or aquisitions: 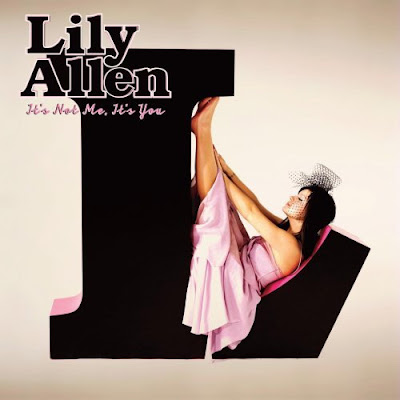 Lily Allen: It's Not Me, It's You CD
It's embarrassing how much I like this chick's music. Considering I don't really listen to new music, just the same old crap I've listened to for the past 15 or 20 years, this is about as close to new music as I get. Her stuff is super poppy, but the lyrics are pretty mean and raw, and I get a big kick out of them. I like it even more because Lily Allen does a lot of outrageous stueff in real like, getting wasted in public and cursing and flashing her boobs and being generally obnoxious. This album is a little more hit and miss than her first. About half the songs I just love love love. The other half really do nothing for me. Doesn't really bother me, though, since CDs are cheap these days, and I just load up the music I like on my iPod anyway.

Speed Racer on Blu Ray
I loved this movie so much I bought it on Amazon before I was even halfway through watching the disc of it I had Netflixed. Still unsure if it is the best movie of 2008, but it is damn good, and truly visionary. Remember how the Matrix was the first movie you needed to by a DVD player for? This is the first movie you need a Blu-Ray player and an HD TV to fully appreciate. I could go on, but this probably merits a blog post just itself, under the heading "Best Goddamn Movie (or Movies) of 2008." 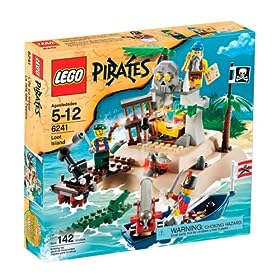 Lego Pirates Loot Island, set #6241
Given to me by my life partner for Valentines' day. Awesome, but not quite as awesome as the new Lego farm sets showing up in stores now. I'll be getting those soon. Look for me to resume the Layman Lego Project when I do. 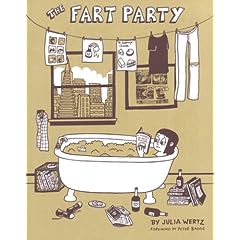 The Fart Party
As I indicated in my NYCC post, this was my big purchase of the con, and my big fanboy moment, since The Fart Party is my favorite web comics (with Paul Horns Cool Jerk being a very close second.) My friend Allen is also a fan, and also purchased a book, and mentioned I was uncharacteristically quiet when I met with the author, Julia Wertz. She is always doing cartoons about wanting to kill people who annoyed her, though, and I just assumed she would want to kill me, too, if I opened my mouth. So I kept my yap shut. This book is funny as hell, and available on Amazon. I recommend it.

08 by Dan Goldman and some other dude
Dan Goldman is a buddy of mine and we spent a very enjoyable evening together at NYCC eating Afghani food and going to a sake bar. I like to buy books to support my friends and needed something to read on the plane flight home, so I picked this one up. Loved it a lot. Of course, it was non-fiction, so a lot of what I loved was the fact, at the end of the story, the shitbag Republicans are sent packing and we finally have a president who isn't a dunce. Anyway, more good stuff.

Aveda Rosemary Mint Shampoo
'Cause I like my hair to smell good, bitches!
Posted by "crusher" at 11:38 PM 2 comments: So... I got back from New York Comic Con yesterday, and had the best con in recent memory. Just a damn good time, invigorating, and the polar opposite of a lot of cons I've been in the past, particularly San Diego.

A big difference, certainly, is I'm not hovering around DC and Marvel, there's no expectation or hope of work, so I was just able to enjoy things, getting to the con late, dining with friends, drinking with friends --though not quite to the excess that I have in years passed. I stayed with friends in Brooklyn, which feels decidedly lower key than Manhattan.

I didn't buy much at the show, but I never do. My big fanboy moment was buying 2 copies of Julia Wertz's "The Fart Party," a collection of my favorite web comics.

I did miss out seeing a couple friends, Troy and John C. in particular, which was a bummer, but, overall, it was just a great show, and I really enjoyed seeing everybody I got to see and hang out with. Highlights? Seeing a filming of the Colbert Report; an Afghani dinner with Turkish coffee followed by good conversation in a sake bar with a good friend and one of my all-time favorite colorists; CB Cebulski's all-star party, too goddamned packed but it was nice to see practically every single person in the comics industry in one place; a Southern Mexican meal of really bizarre Mexican food; and then just chilling in the airport playing Warcraft on free wi-fi and running into some other friends and getting a quick drink with them. Even my down-time was good, as Battlestar G and Lost, which I was able to watch on my laptop, were particularly good last week.