We had a great reception to CHEW, and sold a metric crap-ton of comics. Met a lot of cool fans and readers, too. I bought a copy of Fart Party 2 from Julia Wertz, and the Doc Splatter Omnibus from Paul Horn. I gave a copy of PUFFED to Jorges Garcia, Hurly from Lost, and told him if PUFFED was a movie, he should play the lead. 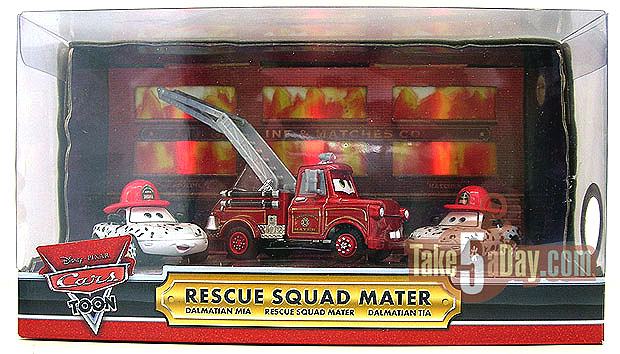 I picked up a Rescue Squad Mater for Carter, who was grateful for about 24 entire hours.


Not the most eventful con, true, but, then, I spent most of the con largely sober and working the CHEW booth.

Looks like Our Boy Layman is finally growing up!
Posted by "crusher" at 12:47 AM 4 comments:

Yes indeedy, we will be at San Diego Comic Con, at Image Isle at booth #2729. We've got a table and both Rob Guillory and Ol' Layman will be parked there as often as humanly possible. Be sure and stop by and get your books signed, find out about what's coming up in future issues, see preview pages for Issues #3 and #4, and hear long boring stories about how Layman lost his leg in the war and how kids today aren't as good as when he was young, way back in the early days of the 20th Century. Rob will have some original art, and will be doing sketches and commissions. We should have issues #1 and #2 for sale, unless disamster strikes (but don't hold your breath for any very sold-out first editions-- it's possible, but don't count on it.) Layman will also be debuting his new hardcover, Stephen Colbert's Tek Jansen, so if you can't find him at the Image Booth, he'll be signing at Oni at

And be sure to check out Layman at the Image Panel on how to pitch an indie comic (where Layman will have no advice whatsoever except "If you want a hit comic, hire Rob Guillory," followed by a litany of obscene threats and invective against anybody who actually thinks about trying to hire Rob Guillory.)

Anyway, here's information on the panel:

Thursday, July 23
4:30-5:30 PM Workshop - Creating Creator Owned ComicsThe Image Comics Way
Want to bring your own vision to comics? Learn how from the people who do it best! Join Image Founder Jim Valentino (Shadowhawk) with Image luminaries Joe Kelly (I Kill Giants), John Layman (Chew) , Jimmie Robinson (Bomb Queen) Steven T. Seagle (Soul Kiss), and Richard Starkings (Elephantmen) for a very special, unprecedented workshop with an insider look at the creative process and tips on perfecting your pitch. This will also include a question and answer session giving you the chance to directly talk to many pros who have made their dreams their reality! Room 7AB


Anyway, hope to see you there! And keep an eye out for the special "booth beef" male-model we've hired to help represent CHEW. Prepare to behold the glory of "The Chew Bear," the absolute personification of handsomeness, style, and raw sexual power. For those of you who missed out on Chew #1, and don't want to get gouged on eBay for an original printing, Robert Kirkman and Image Comics have allowed us to piggy-back with The Walking Dead, to create a B&W flip book special edition at no extra price!

It goes on sale today, so if you are wondering what the CHEW fuss is about, here's a great way to check out the book --and get you monthly dose of Walking Dead survivalist horror mayhem!

This news is almost as exciting as my latest Lego set, the amazing HOTH ECHO BASE!!!!!

From the Image press release:
CHEW KEEPS BITING ITS WAY THROUGH MULTIPLE SELL OUTS!
John Layman and Rob Guillory's cannibalistic crime thriller, CHEW, faces yet another sell out on its first and second issue!

Immediately upon release John Layman and Rob Guillory's CHEW has experienced an immediate sell out for both issue #2 and the second printing of issue #1.

"I'm shocked, pleased and flabbergasted by the enormous positive response we've gotten from CHEW," Layman said. "I can't put into words how gratified I am for the readers and retailers who have helped spread the word about this strange and unique little book. I'm also grateful to Image for taking speedy action to help get this book into as many readers' hands as possible. Thanks, everybody! The best is yet to come!"

CHEW's star, Detective Tony Chu, is a cop with a secret. As a Cibopath, Detective Chu gets a psychic impression from whatever he eats. While it means he's a hell of a Detective if he can stomach the evidence, once his secret gets out the government makes plans for him, whether he likes it or not. CHEW blends horror, mystery and the strangest ability of them all in an ongoing series of horrific crimes solved in the most horrific way possible. Since its release, the book has been receiving an immense amount of buzz, with many retailers directly contacting Image for as many copies as they can spare in light of the first issue's now multiple sell outs. Even Layman's fellow creators continue to talk up the book.

CRIMINAL writer Ed Brubaker said, "CHEW is one of the most original and intriguing new comics I've seen in years."

Image Comics Publisher Eric Stephenson added, "The last time we saw such a tremendous response to an all-new title was when we launched THE WALKING DEAD. By all indications, CHEW is on its way to becoming the next monster hit from Image Comics."