We're currently waiting for Darlene to cast her perhaps deciding vote for the final eLAYMANation of week. The way things stand, there are two votes for Ollie and two for Marcus, meaning both of their sorry asses gets the boot. Diego has a half-vote, meaning Darlene, the final vote, holds his fate in her hands. Or she can simply cast a meaningless half-vote for somebody else and Diego stays. What will she do?

Hannibal, who writes about films in a column at CRB called The Real to Real Comic Rap, clearly must be infatuated with Sally Field, to so lovingly name his blog after her 1991 comedy masterpiece of the same name. Here's what the Internet Movie Database has to say about "Soapdish:" "Celeste Talbert has been the queen of the soaps for over two decades. Montana Moorehead needs to get her out of her way before she can move on and begins her program to get her to leave. She hires an old boyfriend of Celeste to be on the show and has Celeste become a murderer in the script, but each attempt has unforseen consequences."

Glad I could clear that up. Thanks for the correction, Hannibal. 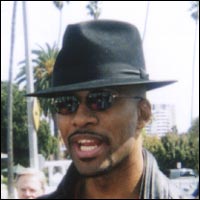 Disclaimer: I fully expect to someday be murdered for this post.
Posted by "crusher" at 10:54 AM

I'm not saying it's a threat -- I'll call it a promise. There will be a reckoning.

Due to unplanned circumstances I was delayed in casting my vote.

My hair is now dry and my vote has been cast.